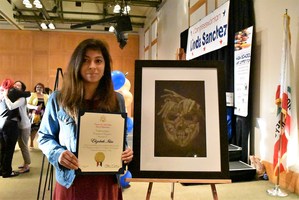 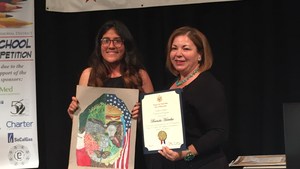 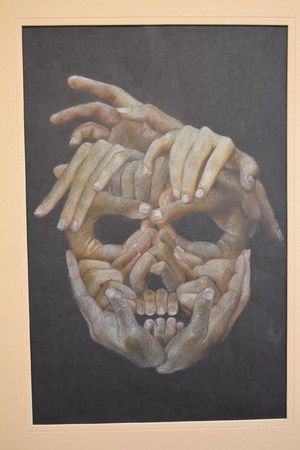 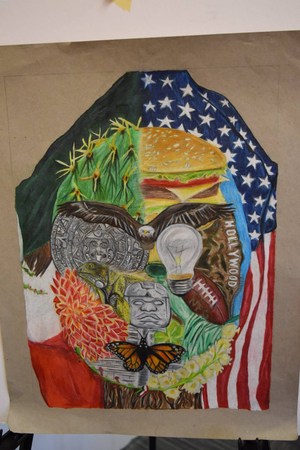 La Serna High School junior Elizabeth Islas will venture to Washington D.C. to see her award-winning drawing on display in the U.S. Capitol after taking the top prize at the 38th District for the 2017 Congressional Art Competition, a national contest that recognizes and encourages artistic talent among high schoolers from across the country.
Islas on April 13 was awarded best overall work for her piece, “A Form of Expression,” by U.S. Rep. Linda Sanchez, who represents 38th District communities spanning Monterey Park to Lakewood, as well as by a panel of judges made up of esteemed local artists, art teachers and professors.
Along with her family, Islas will attend the National Congressional Art Competition Reception in June in Washington, D.C., where she will also receive a scholarship for her work.
“I am so happy and honored to win first place for this competition,” Islas said. “To have the opportunity to express myself, and then to have the expression win is a really great achievement for me.”
The competition is open to artistic mediums that include paintings, drawings, collages, prints, photography and computer-generated art.
Isla’s piece – which depicts multiple pairs of hands that create the image of a skull – will be displayed at the Capitol building for one year. The drawing will compete nationally with high school winners from other congressional districts in the U.S.
“Elizabeth is a natural artist. She is very good at drawing and painting from observation, but she’s also so creative that she can put her personal twist on the subject matter in a very compelling way,” La Serna art teacher Michelle Patino said. “She is the type of person who will always be creating art because it’s who she is.”
Patino said that Islas worked on her project for more than 30 hours, meticulously drawing and perfecting her piece.
In addition to Islas’ victory, La Serna senior Brenda Heredia won the People’s Choice Award for her piece, “Amexican,” which will be displayed in Sanchez’s office. Her drawing features the Mexican and United States flags forming a backdrop for such images as a cheeseburger, the Aztec calendar, the Hollywood sign and a bald eagle.
Sponsored by the Congressional Institute, the Artistic Discovery Contest began in 1982 as a way for students in each of the nation’s congressional districts to showcase their artistic skills.
“I am so proud of Elizabeth and Brenda, whose hard work and artistic abilities paid off in the competition,” Principal Ann Fitzgerald said. “They reflect the excellent fine arts program we have at La Serna, as well as the extraordinary teachers we have encouraging and directing the students’ talents.”