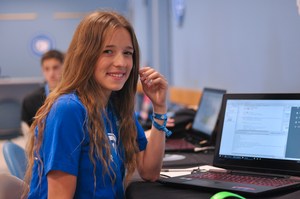 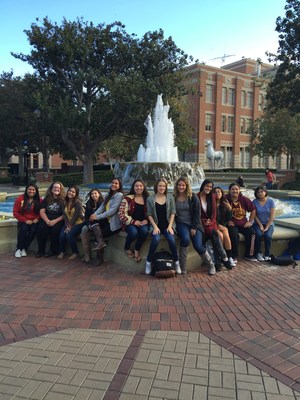 La Serna High School will offer two new STEM classes this fall thanks to the lobbying efforts of Markie Wagner, a rising senior who is well on her way to launching her second smartphone app.
This summer, two La Serna High teachers are receiving training to teach Intro to Engineering and Advanced Placement (AP) Computer Science at Cal Poly Pomona through the Project Lead The Way program.
Wagner is one of many girls and young women entering the computer coding field, in part, because of encouragement from the nationally renowned-organization Girls Who Code, which is dedicated to closing the gender gap in the technology industry. Twitter, Facebook, Microsoft and other tech companies have pledged to consider hiring alumnae from the program.
“I think it’s important for girls to take that leap into computer science,” Wagner said. “By taking that leap and seeing what it’s like, it might surprise a lot of people.”
As a 9-year-old, Wagner played video games on the family’s Mac and was fascinated by how they worked. She started researching how to develop websites using pre-made templates and taught herself how to use HTML and CSS – programming languages used to build web pages.
At 13 years old, Wagner created a free Android phone app based on the Hasbro game Catch Phrase that was downloaded 28,000 times. She is reworking the app to comply with trademark rules before making it available on the App Store.
Last summer, Wagner participated in a seven-week program offered by Girls Who Code at the Boyle Heights Technology Youth Center, providing her opportunities to meet the chief technology officer of The Walt Disney Studios, a computer scientist at NASA’s Jet Propulsion Laboratory and executives at AT&T.
Wagner was eager to teach children about computer science after graduating from the Girls Who Code program. She got her wish in September when she was invited to tutor and mentor fifth graders on coding and robotics at the 32nd Street USC Magnet Elementary School.
La Serna High Principal Ann Fitzgerald said she was impressed with Wagner’s passion for coding and hopes her peers will immerse themselves in the engineering and computer science fields because of the newly offered STEM classes, which will launch this fall.
“Markie’s passion for science and coding has really inspired us to create an engaging curriculum that is timely and relevant to students who want to pursue careers in the tech industry,” Fitzgerald said. “We’ve been so impressed by her story and her desire to start a coding club on campus. We want other students, particularly girls, to pursue STEM careers.”
Wagner said that many girls are apprehensive about learning code because they worry about not being able to succeed. However, despite the challenges of creating an app or website, seeing the finished product is always amazing, Wagner said.
Wagner is participating in an intensive two-week camp at UCLA this summer, where she’ll learn about computer science and live in a campus dorm. She hopes to launch her second app, First Jobs – an app that helps high school and college students find jobs and internships – on the App Store after finishing the camp.
“I was always very inspired by Steve Jobs and his philosophy of dedicating your life to make a dent in the universe,” Wagner said. “I want to leave something positive behind in technology. One day I hope I can be one of those role models for women in technology.”